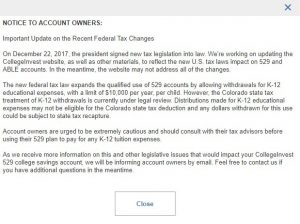 529 plans are a tax-advantaged account that allows saving and investing for college expenses. Before last year’s new tax law was passed, one got tax-deferred growth in the account, and tax-free withdrawals for qualified college expenses. Even better, there were very few 529 contribution limits on most plans. Now, the recent tax law has opened up another possible way to use 529 funds tax-free.

Until 2018, you could not use your 529 plan to pay for anything other than higher education expenses, in other words, college. Withdrawals from a 529 plan for any other purpose were not only taxable, but subject to a 10 percent tax penalty. But, the new tax law passed at the end of 2017 changes the rules.

Interested in automatically investing for non-college expenses? Check out my Acorns reviews.

There is a catch.

Of course there is.

You see, when Congress set up the 529 program, they didn’t want the Federal government to be the ones who actually implemented it. That would require hiring people, and money, and that isn’t how the Feds usually roll. Whenever possible, Congress likes to dump the responsibility for its brilliant ideas on the states, and that is just what it did here.

All 50 states offer a 529 plan. Those plans are each governed by Federal law in that they must do certain things and have certain rules and requirements for the money in those 529 programs to qualify for the preferential tax treatment 529 plans receive. Specifically, the funds inside of a 529 plan grow tax-deferred, and if withdrawals from a 529 are used for qualified education, they are tax-free.

Those rules have now been changed so that tax-free withdrawals for K-12 schools, such as private schools, now count as qualifying education.

Remember, however, that the 50 states each set up their own 529 plans, and those 529 plans have rules implemented by the states. While the states cannot change the federal taxation of money in a 529 plan, that isn’t the only consideration. For example, many states offer a state tax deduction for contributions made to the state’s 529 plan. Usually, the states piggy back on the federal rules saying that if you make an unqualified withdrawal, then you have to pay some sort of state tax, and possibly a penalty on that withdrawal.

If you want to automatically save without investing, my Digit reviews may have an answer.

The murky part is the exact language of how a 529 plan is setup. For example, if a state copied the former federal rules into the state rules (law), then those rules need manually changed by the state legislature. If the state did not copy the rules, but rather said something like, “qualified deduction under federal tax law,” then those rules were automatically changed along with the federal tax law change.

In the state of Colorado, it seems there is something of a gray area, as this pop-up window shows when you log into the Colorado 529 plan website. The New York 529 plan website  has a similar alert.

So, before you run out an pay second semester tuition at your child’s private school from the 529 plan you have saving for college, be sure and research your state law and state 529 plan rules to be sure you aren’t setting yourself up for a state tax hit, or state tax penalty.

This is not an exhaustive list and represents just a quick look. Be sure to check your own state’s 529 plan rules and consult with your financial advisor for specific advice on your situation. Keep in mind that even if the state doesn’t automatically comply with the new 529 plan federal tax law, that doesn’t mean they do not intend to. In some states it is just a matter of having the time to update a rule or pass a law.

These state have either officially said NO to K-12 education spending from their 529 plans, or have said that there is a question or other ambiguity of if it will work. Again, this list is not complete, and other states may have issues now, or later. Also, these states may change their rules at a later date to allow for K-12 tuition payments. Check your own plan’s rules. Currently, these states have official answers ranging from “We don’t know yet,” to “No.”

These states have affirmed that paying tuition from the state’s 529 plan is OK. This list is also not complete. Check your own plans’ rules and procedures.