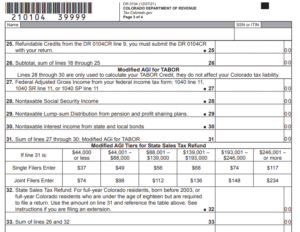 Taxpayers in Colorado began receiving their 2022 Colorado refund checks in the mail this week. Several readers have reported getting theirs, and I got mine on Monday, so they are definitely coming.

To qualify for a refund check from Colorado you had to be a full-time resident in 2021, and you had to be 18 by December 31, 2022. You also had to file your Colorado income taxes.

Check out this in-depth look at Acorns investing.

Politicians were fast to break their arms patting themselves on the backs for getting $750 to each Colorado taxpayer. It is a nice surprise, and the Democrats get credit for getting $750 to your mailbox in August 2022 instead of making you wait until early 2023 to get your refund when you file your Colorado income taxes. Republicans are quick to point out that Democrats have supported ending Tabor in the past, so they think they get credit.

Where Your Colorado Refund Check Comes From

You like free money as much as the next guy, but you are an intelligent and curious srot, so you’d like to know exactly where this refund check money is coming from. That’s a fair question, and unlike so often in the world of personal finance, it’s a very easy question to answer.

If you have lived in Colorado long enough, or paid attention to its politics, you may be aware of something called Tabor. Tabor was passed by the voters back in the 1990s and was such a cluster of junk packed around the popular notion of having to get a popular vote to raise state income taxes that the next year they made it a law that everything presented to the voters had to be only one topic.

One of the pieces of Tabor that nobody paid attention to is that it limits the amount of money the state can collect via a calculation that has something to do with inflation and population growth. The exact calculation isn’t important to us. We just need to know that it exists.

Now, although the final calculation has to take into account taxes collected through December 2022, it isn’t difficult to run the calculation now and see that there is a certain amount that will have to be refunded to tax payers. So, they calculated a number they knew would be safe and sent it to you now as a check instead of just putting into the tax forms for 2023.

Do I Have to Pay My Colorado Refund Back?

No. You do not have to pay back the Colorado refund check. Here is the deal.

Normally, when Colorado has to refund taxes for Tabor, it puts a section on the Colorado tax form. Last year it was Calculated on Line 31 and you put the refund credit on Line 32.

As you can see from the table above, last year’s refund was a lot smaller.

You are getting a Colorado refund check in the mail instead of getting a $750 credit here. There is nothing to pay back. In fact, you will still get a refund from this line because the State deliberately calculated an amount that wouldn’t be 100% of the refund (what if they were wrong?) so whatever the total refund is based on tax collections through December 31, 2022, it will go here, minus the $750 they already gave you.

Is The Colorado Refund Check Inflationary?

A lot of politicians like to talk about inflation, and a lot of them have no idea how economics and inflation works. So, is the Colorado refund causing inflation?

Generally speaking, a higher monetary supply is inflationary. However, the money for this refund already exists in the money supply. It just happens to be in the State’s checking account. Unlike some federal government payments, this refund does not create more dollars. The state does not have that power.

Also, Colorado is part of a huge economic system called the United States, which in turn is connected to the economies of the world. A measly $750 to less than 2% of the U.S. population is hardly going to push the inflation needle enough for anyone to notice. This time around, most of the inflation is caused by higher oil prices and the increased costs that pushes through the supply chain. If oil was $50 a barrell right now, there wouldn’t be any inflation.

I have my Wallethub review look here.

Thieves love government checks because they can cash them almost anywhere. Be sure to check your mail every day until you get your refund check. You know the checks are coming, and so do mail thieves.