Several years ago when I was a wild-eyed, fresh out of college, computer guy, I got my first “real” job with a local company. The company had around a 100 employees or so which meant that the HR person was the Office Manager.

On my first day, the Office Manager went through all the basics with me: payday, W-4 forms, copies of my Social Security Card (or passport), and so on. We also went over my “Benefits.” Now, at the time, I didn’t much understand what benefits were or why I cared (other than insurance and vacation time) but, I understood what the word benefit meant, so I nodded along and paid close attention.

One of my benefits was the right to join a credit union. Back in those days credit unions were a little bit tighter in their membership requirements, still it wasn’t too hard to join one. But, since it was one of my benefits, I marched down right away and opened an account.

Luckily for me, my benefit took me to Bellco Credit Union. Bellco Credit Union was formerly the credit union for Mountain Bell employees, hence the name (Bell-co). It turns out that Bellco (as it is known locally) is one of the best credit unions around in Colorado. So, even as I became more financially savvy, I stayed a Bellco customer and have been for many years now. In the last year or two I’ve moved a lot of my stuff to Online Banks because of the better rates (ING Direct, and WAMU, but I’m still not sold on WAMU — I heartily recommend ING Direct). Recently, I logged on to my Bellco online account to find this: 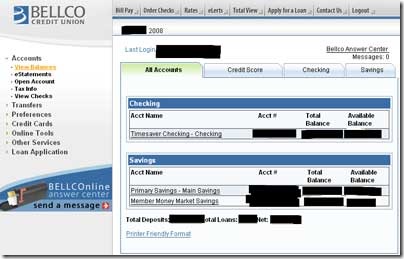 If you can’t read it, the second tab there says Credit Score. I’ve been doing online banking for several years now and have never seen that before. Curious, I clicked on it expecting to get some sort of sales pitch for a $9.99/month credit monitoring service scam. A suspicion that carried over when I though it was just a Credit Karma scam online, too. Instead, I got this: 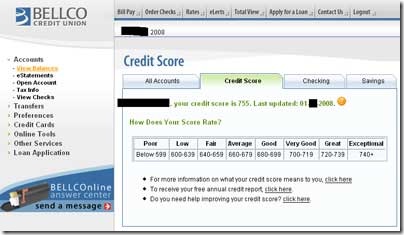 No sales pitch, nothing shifty, just my FICO scre: 755, which is up some from the last time I checked.

How awesome is this? A free credit score from my credit union. Not for signing up for anything, but just because they have it and they might as well tell me what it is. (Most banks and credit unions, as well as most credit companies, pull your credit on a regular basis to keep up with your current situation. That way, it isn’t a surprise when you show up bankrupt some day, and also so that they know whether or not they want to notify you of some new services or features they have.)

If your credit union or bank isn’t this great, you might want to check out my Credit Karma review and see about getting a free credit score and free credit monitoring from them.

Now, the nit-picking natters of finance will show up and claim that this isn’t my “real” credit score.

Most people don’t know this, but you can actually get several different credit scores which will weight things differently. So, a “real” credit score is usually the on you use to get a mortgage and most people mean that one when they talk about your FICO score. But, there are also ones that weight your credit card history more which are used primarily by the banking industry and credit card companies.

Think of it this way. You have a scale in your house. When you get on it, it says that you weigh 195 lbs. Does it matter if this is your “real” weight?

If a scale at NASA says that you actually weight 203 lbs. does this matter at all even though the number is off? It depends on what you are doing with the number. If you plan to walk across a bridge with a weight limit of 200 lbs. it matters, but if you want to know if you are gaining or losing weight it doesn’t matter. After all, if your scale says 198 lbs. next time you get on it, that number probably isn’t “real” either, but you do know that you gained 3 lbs. and that is what you care about.

Same thing with your FICO number and credit score. Unless you are actually applying for credit you don’t need the real number. I don’t know about you, but I get a new loan about once a year. The other 364 days all I need to know is if something I did made it go up or down.

For example, last summer I closed a bunch of credit card accounts. I had these cards from back in my consultant days and did a lot of traveling so they were things like the American Express Hilton Points Rewards card. Now, Hilton is a great hotel and they are often perfectly located for business, but they aren’t really a tourist hotel. So, if I want to go to Savannah, Georgia and see the plantations and cherry blossoms and so on, I want to stay in the historic district. No Hilton there. If I want to stay over in the business area, there is a Hilton there. So, needless to say I wasn’t using this card or some of the others I had. (I use the American Express Hilton one now because I joined Costco and they only take American Express.)

When I went to get a new car (my old one came off of lease) I was stunned to find out that we had to pull all three credit scores in order to get one that was over 720. 720 was the cut off for the best rate (and in this situation the REAL number matters!). What caught me so off guard is that I have always had excellent credit. The only time I have EVER missed a payment was back in college when I moved back home for the summer and forgot to change my address with one company. Otherwise, perfect payment history. I ordered my credit reports and couldn’t find anything wrong. I didn’t have any missed payments, nothing! The difference was in my percentage of credit used. You see, I manage my cash flow very well, so I use credit cards to earn rewards like free trips and stuff. I cashed in a bunch of points for Baby’s R Us gift cards when my wife was pregnant and basically outfitted the nursery for free. As a result my credit cards always have a balance on them. I pay it off in full every month, but that still means there is a balance. That balance gets reported and since I closed all of my “empty” credit cards (Why not? I don’t use them) my percentage used went up. If I had known that was the effect, I obviously wouldn’t have done it.

How did I find out? I re-opened the Amex Hilton Card (for the Costco thing and to keep my existing Hilton Points from expiring) and then my wife’s car came off of lease (we bought that one) and my credit score was all of the sudden easily sailing over the 720 number. Now, I’m not willing to pay $10 a month or MORE! in order to watch my credit score, but it would be great if there was a way for me to check in on it every so often so I would know if something I did had a bad (or good) effect on it.

Yeah, Bellco! Good for you! Hopefully this thing updates every so often (quarterly would be fine) and I’ll keep checking it. Then, if I open say a Target Card (10% back after you spend $X) or a cash rebate gas card (1% back on gas sounds pretty good at $3 a gallon) I’ll know if it hurt my credit score and I’ll be able to do something about it before I’m applying for my next credit, whenever that might be.

If you live in Colorado, my advice is to open a Bellco account. Ask them what you have to open to get the online banking credit score. Then, track your score to see if what you do messes up your score. Sure, you probably have to leave $100 or something in an account you don’t use, but that beats paying $120 / year to see your score!

2 thoughts on “Free Credit Score at My Credit Union”