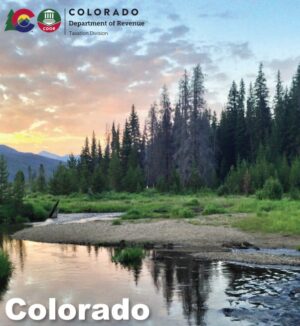 I live in Colorado. Most of personal finance and achieving financial independence applies to everyone, nationwide. When it comes to taxes though, there is a great deal of variation among states. I may dig into some other states as time provides, but for now, here are some 2021 Colorado Income Tax Tips for the taxes filing in early 2022.

The best part of writing about 2021 Colorado Income Tax Rates is that the state has a flat-tax. In other words, everyone in Colorado pays the same tax rate regardless of how rich or poor you are. Before you get all up in arms, percentages are by their nature, progressive. That is, someone will $500,000 income paying 5% will pay more taxes ($5,000) than someone paying $100,000 ($1,000).

The worst part of writing about Colorado income taxes is that unlike the drawn out battles of doom in the U.S. Congress to change anything in the Federal income taxes, Colorado’s income taxes change all the time, sometimes automatically. Such is the case for 2021 where Colorado’s TABOR law will make the Colorado Income Tax Rate for 2021 down to 4.5% from 4.55% in 2020. In addition, Coloradoans will get a TABOR tax refund. – Don’t get too excited. It’s usually peanuts.

Federal income tax numbers for 2022 were recently released. You can find the 2021 standard deduction here.

Back in 1992, Coloradoans were asked to approve an amendment to the constitution that required a vote before raising income taxes. I remember, because 1992 was the first election I was allowed to vote in. Now, revisionists will tell you that all the other stuff in the Taxpayer’s Bill of Rights was also widely touted. That is a lie. In fact, TABOR, as it is called, was crammed with so much stuff that almost no one knew about ALL of the things that they were voting for, when all the really wanted to do was make there be a vote before any tax increase. (A similar bill failed in California, which began a long trend of national money flowing into votes about Colorado taxes. If you can’t get a big state like Texas, New York, or California to do what Grover Norquist wants, at least it only takes a few million to run an election in Colorado.)

Anyway, no one has tried to raise taxes since, so yea!

However, TABOR has formula built into it that requires refunds (sometimes) and tax-rate changes (sometimes). This is a dumb way to run a railroad and everyone knows it, but Republicans, “Taxes bad,” and Democrats, “Taxes help,” and no one is all that interested in trying to repeal the whole thing. (Parts have been chopped off, and plenty of cities, counties, and other local government entities have asked their voters to opt out of these calculations.)

The calculation itself has something to do with population growth and inflation. The net effect is that in good times we all get these little rebates, and in bad times, the so-called “ratchet effect” ensures draconian cuts, which is exactly the opposite of what you want to do when the economy is bad.

The numbers are all calculated based on data from June, because Colorado’s fiscal year runs June to June. (So, State employees pick new benefits in July instead of January, like everyone else.)

There is a Colorado Alternative Minimum Tax of 3.47% that I won’t go into here because it isn’t very common. If you do need to pay it, TurboTax, or whatever will figure it out. If it’s more complicated than that, you probably already have an accountant or tax attorney.

You can mail your taxes, but it is easier to file Colorado income tax online. It is free to file your Colorado income taxes online, although tax preparation software like TaxCut, TaxSlayer, and TurboTax may charge you a fee to file electronically for you, even after your pay extra for the State package. My advice is to print out your forms for your records and then just type the numbers in for free.

How To Do Colorado Income Taxes

Colorado income taxes were simple to file, but there have been some changes that make it a tiny bit tougher, but don’t get discouraged. The whole last page was basically asking if you want to donate your refund to one of the charities listed. It got so out of hand, the moved it to its own form. Form 0104CH allows you to donate your refund. Look for the total amount of donations to plummet since people won’t even look at an extra form like that. — The program was a victim of its own success. Other charities saw how much the original charities pulled in and lobbied to be on the form until there were so many the donation section was the longest part of the form.