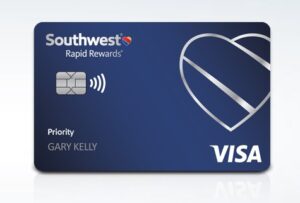 There are actually two different kinds of Southwest business cards, the Plus and Premier.

For the personal, non-business Southwest credit cards, the difference between Premier and Plus is pretty small. The Plus card has a $69 annual fee compared with the $99 annual fee for the Premier Card. So, what does that extra $30 per year give you with Premier?

With the plus card you pay a 3% foreign transaction fee. This is awful, and you would never want to use this card in another country for this reason. However, if you don’t do a lot of international travel, or if you have a different card to use, then, that may not be a deal breaker for you. Another difference is the amount of anniversary points you get.

Each year Southwest awards cardholders a bonus set of points for your anniversary. As a plus card holder, you get 3,000 points, as a premier card holder you get 6,000 points.

The big deal, if you fly a lot, is that the Premier Cards points count as “tier qualifying points,” but those from the Plus Card do not.

So, what are tier qualifying points and does it matter?

The answer depends on how often you fly. Like all airlines, Southwest Airlines has a preferred customer status. You may have heard this referred to as Gold Status on other airlines. On Southwest, they are A-List, and A-List Preferred. On most airlines, the preferred status gives you priority for upgrading into first class. Southwest does not have first class on its airplanes. Instead, you get priority check-in, that is you get to get on the airplane first. Also, as A-List Preferred, you get free WiFi on plans that have it.

To be A-List, you need to fly 25 one-way flights, or have 35,000 tier qualifying points. In other words, you’ll need 14 round trip flights, or you’ll need to spend $35,000 per year for this benefit of the premier card to matter for you.

To really make the Southwest Credit Card worth it to you, watch for sign up bonus offers. Open new Southwest credit card account bonuses are sometimes so big that you can easily reach getting a companion pass, which allows someone to fly free with you. Normally, you need 125,000 miles to get the free companion pass but with a 100,000 sign up bonus, which gets a whole lot easier to hit.

The schedule for earning points is that you earn double rewards, or 2 points for every $1 spent, on Southwest Airlines flight and Southwest gift card purchases, and also preferred hotel and rental car partner purchases.

Earn 1 point for every $1 spent everywhere else.

To redeem your points, you just go to the Southwest Airlines website and find the flight you want to book. Then, you can show the fare for that flight in either dollars or points.

Southwest points are a little tricky to calculate the value on. That’s because the point per dollar value is not a round number, and it varies based on whether you are getting a Wanna Get Away fare or an Anytime Fare, and so on. Basically, you get around 1.65 cents per point for Wanna Get Away Fares and around 1.1 cents per point. How much that works out to per dollar spent depends on whether you are getting 2x miles or just 1x miles.

Unless you fly Southwest Airlines a ton, or there is a big bonus to open a Southwest rewards credit card, then you should be done evaluating this card right now.  Skip it and get a credit card with universal miles or points that you can use on Southwest or for a billing credit when you buy an airfare ticket.