Tesla has had a big weekend. At last count, according to Elon Musk’s Twitter account, there were 276,000 pre-orders for the new Tesla Model 3. An earlier tweet referenced an average order price, with options, of $42,000. Musk is Tesla’s CEO, so this counts a public disclosure of material facts of a publicly traded company.

As you can imagine, there is a lot of jabbering about what this does or does not mean for Tesla. Let’s look at the facts to get an idea of just how much good news there is, or is not, going on here.

First, as some have pointed out, multiplying $42,000 times 276K pre-orders comes out to over $11 billion in Model 3 pre-orders. That would be by far the biggest income Tesla has ever had. However, that is nothing more than a paper calculation. How much of that money Tesla actually sees depends upon a lot factors, including how many people decide to cancel their fully refundable pre-order.

That being said, pre-ordering a Model 3 Tesla requires registering, and a $1,000 deposit. While the deposit is fully refundable, it is money paid. In other words, this isn’t a bunch of internet kids running bots to juice up the numbers in the American Idol voting. These are real orders, made with real cash. Furthermore, Tesla gets this money now. So, the company has real cash in hand, totaling $276 million. That’s good.

Of course, that $276 million will be reported as a liability on forthcoming quarterly reports because the company owes either that $1,000 back, in the case of a canceled order, or as a $1,000 price reduction on the final purchase.

So, the question becomes when, and how fast, can Tesla cash in on this inflow of pre-orders?

Check out my Acorns app review.

When Tesla Model 3 Is Available?

The company publicly projects the Model 3 will be available in “late 2017.” That can mean a lot of things, including that only one car ships in 2017. Even if it isn’t quite that extreme, it is still likely that Tesla won’t actually start converting those billions of dollars of pre-orders into billions of dollars of actual sales until 2018 at the earliest.

Then, there is the question of how fast. This is the most important question, actually. You see, if, hypothetically, Tesla could ship all 276,000 cars in 2018, then that would represent an blockbuster year with $11 billion in revenue. On the other hand, if it takes four years to fulfill all of those orders, then, we are looking at a much more paltry $2.75 billion per year in revenue. In other words, the rate at which production ramps up is everything.

Finally, there is the issue of cost versus price. Right now, Musk and Tesla are counting on the Gigafactory being built in Nevada to drastically lower the cost of the batteries used in Tesla’s cars. This lower price per battery is the only way to make the car profitably. How much profit depends upon how low the battery price can go. And, the really sketchy thing is that the factory isn’t finished yet, so no one knows how the expenses will work out, or if the whole factory will ever really work as envisioned.

Tesla Stock and the Model 3

Still, investors like good news, and a quarter billion pre-orders fits the bill. The stock has recovered completely from the downfall it took earlier this year over concerns that things were not progressing quickly enough for the company. 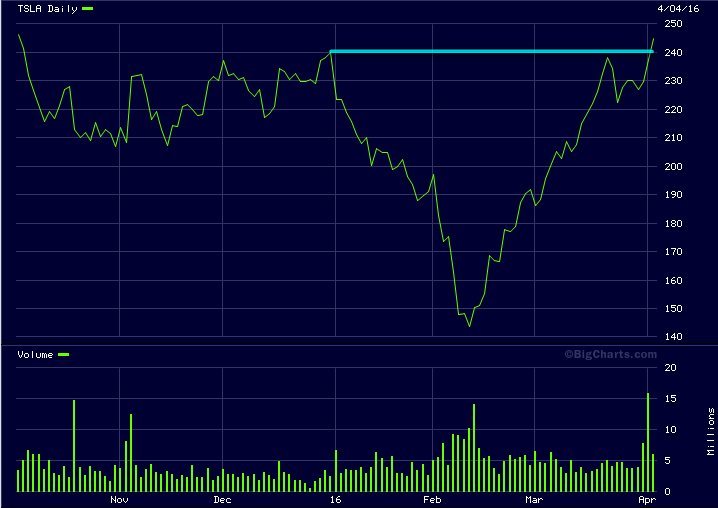 In the end, this investment is based on what you believe. Either you believe that Musk and Tesla can meet the timeline they are pursuing (both for the car and the Gigafactory), or you don’t. There is literally NO DATA to go on. So, you have to ask yourself just one question, “Do I feel lucky.”

This article is for informational purposes only. This is not an offer to buy or sell securities. The author is not a financial advisor, and does not hold himself out to be. Consult your investment professionals and tax professionals for information specific to your situation. As of this writing, I own Tesla stock, however, that can change at any time, without notice.