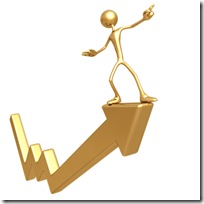 The logic goes something like this. Google is not only the largest search engine, but it is also the largest provider of Internet advertising, particularly in America where its ad market share is something like 75% or so. Thus, Google acts as a bit of a proxy for the online advertising market in general. Online advertisers, then, spend money on online advertising only when, a) they have the money available to spend, and b) there are customers out there spending money to attract. So, theory is that since Google’s earnings came in above expectations, then that shows that advertisers are spending more money on online ads, which therefore means that more consumers are spending money online. That’s the idea, anyway.

Google Is Not The Economy

It is tempting to pronounce everything that Google does and everything that happens to Google as very important to major aspects of American life, including the overall business environment, and the U.S. economy. After all, Google is probably one of the most followed stocks in the country. Those who own shares can’t stop obsessing about them (and using them as proof that they are smart investors) and those who don’t own them can’t stop obsessing about whether or not they should cost as much as they do. Analysts trip over themselves raising their 12 month price expectations and revenue forecasts, each one dying to be the one who was "right" by calling the huge upward move in the most popular stock.

However, there is a major problem with using Google’s fortunes in this way. Regardless of whether or not Google’s stock is or is not a good investment now, the company makes a very bad barometer of the current state of business and by extension, the economy overall.

Google’s advertisers are almost exclusively smaller businesses. As such, Google’s fortunes do not connect very much with the major corporations whose fortunes move the most widely followed market barometers like the S&P500 Index, the Dow Jones Industrial Average, and even the NASDAQ 100.

While small business is a major component of the U.S. economy – some statistics suggest that small businesses are THE drive force of the American economy – there is a very big disconnect between most small businesses, and those who advertise online via Google and other ad networks. Entire segments of the small business economy have nothing to do with online advertising. Mom and Pop stores on Main Street, U.S.A. typically do not find their customers online.

In fact, the vast majority of all online ads are placed by online retailers, which is a very small subset of small businesses overall. Furthermore, increased online spending could actually be an indicator of LESS spending by U.S. consumers. After all, many people turn to online retailers hoping to find cheaper prices, different products than they would normally buy, a way to save money by not paying sales taxes, and of course, to shop around for the lowest prices without ever leaving their homes.

While many other indicators seem to be pointing toward a recovering U.S. economy, including the fact that over 70 U.S. cities are no longer statistically in a recession at all, using Google as the proverbial canary in the coal mine for the American economy, carries a very significant possibility of providing the wrong signal at the wrong time.