Every year, the United States Department of Agriculture publishes a report about how much it costs to raise a child until age 18 in America. Of course, the information is only an average, and even then, to make any sort of calculation, a lot of assumptions have to be made. After all, raising a child is a very personal experience and the cost varies a lot based on the choices you make, not to mention variations based on where you live. It obviously takes a lot of time to compile all the necessary data, so the report with numbers for 2013, was just released here in fall of 2014.

You can find the full-report, or cute graphics containing the official report’s details at the USDA’s website. 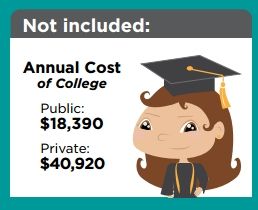 It’s no surprise to any parent that kids can be expensive. Of course, there is food and clothing. Then, there is education, insurance, school supplies, birthday parties, and so on and so on. So, how much does it cost to raise a child from birth to 18? The report breaks out various categories, but the quick version is this:

That last number is low because housing is typically much lower in rural areas.

So, what goes into that number?

The odd part of all this is that housing number. Assuming that you already have to live somewhere. And, assuming that you didn’t have to specifically buy a larger house just for your kids, then that number is more of an accounting figure than a real cost.

For example, my wife and I bought a nice little house with three bedrooms and a basement a handful of years before our kids were born. That mortgage payment did not increase when we had children. So, while technically, some of that payment is “for” them, in reality, it isn’t really an additional cost. Likewise, while there are some additional lights, the real utility cost for most houses is heating and cooling, which — with the exception of some left open doors — doesn’t really change based on how many people are in the house. And, since housing is by far, the biggest contributing factor to the cost of raising a child, the actual cost in reality is probably far lower.

Of course, if you bought a bigger house to contain a larger family, or if you had to rent a larger apartment, that could be directly pinned on those little ones.

On the other hand, one of the expenses most parents worry about is not included in the above totals, the cost of sending your kids to college.

Technically, this makes sense because the numbers are only for under age 18, and most kids don’t go to college during that time. However, saving ahead for college is a smart move, and no matter what the accounting rules say, those 529 contributions do come out of your income while you are making them. So, don’t forget to add $41,000 for private colleges, or $18,000 for public universities.

Of course, chances are there is actually little to nothing you can do with this information. The Cost of Raising a Child Calculator says that you can create an annual cost to help you plan for overall expenses. Again, I’m not really sure how this helps. If you already have kids, the cost of them is irrelevant. Your budget is your budget, it doesn’t matter how much goes to you, your spouse, or your children. There is the issue about buying life insurance, but for the most part, you don’t buy life insurance based on a calculation for how much your kids cost, so much as how much of your income you want to replace.

In other words, I have no idea why the government creates this report other than it gives the media a news story for a week or two.

If you want to see how much your kids cost you, just check your budget.